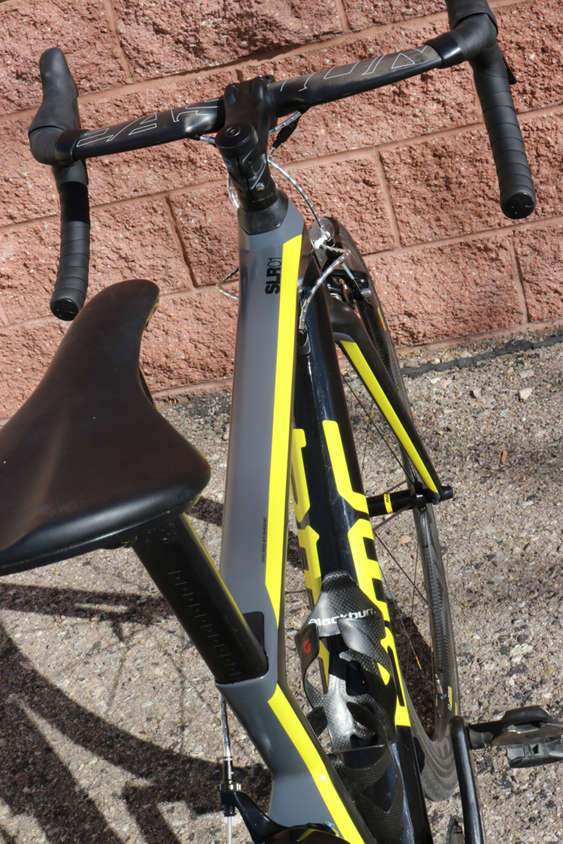 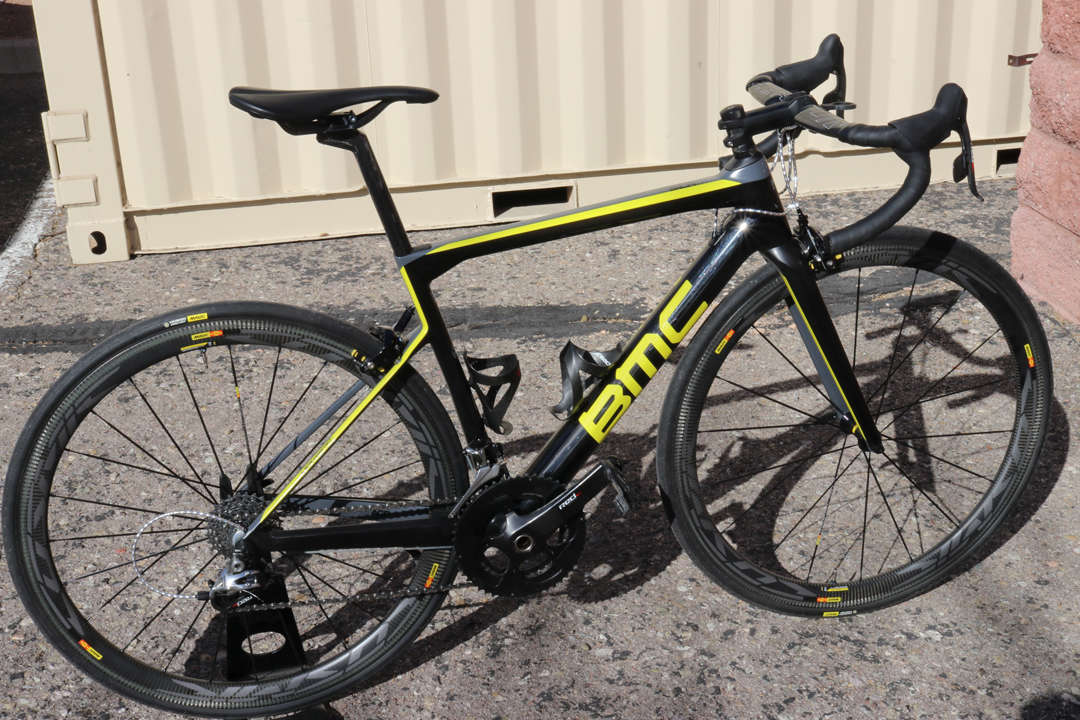 I have said it before, and I will probably say it again, the best part of owning a bike shop is getting to ride some amazing bikes. For anyone who has red my reviews you know I have been and probably always will be partial to Cannondale bikes. People who ride the Evo from Cannondale usually wind up saying it is probably the best bike they have ever ridden. So why ride any other bike? Well because there are so many good ones out there to compare. To me the Evo sets the bar but let me just say, the BMC Teammachine SLR01 clears the bar!

First let’s just look at the bike in general. The SLR01 is the top of the line frame from BMC which has been ridden to victories in every race in the pro ranks. Swiss precision crosses from clocks to bikes as smooth as melted chocolate… sorry to tempting. If tales are true, BMC designers used a super computer to create over 52,000 virtual versions of the frame before being happy with this one.

What the Cannondale Evo lacks in pizzazz and style, the Teammachine has in spades. The lines are modern and sleek with very low seatstays, asymmetrical chainstays and squared off seatpost. The down tube is oversized and very reminiscent of the old Cannondale aluminum bikes of the 80’s, but luckily the comparisons stop there. The large bottom bracket area has given what BMC claims to be 10% increase in torsional stiffness compared to the earlier bikes but to combat a few comments of harsh ride quality, they dropped the seatstay lower and put the seat clamp under the top tube which allows for 20% more of the seatpost to be exposed and allow for greater flex. The frame just looks mean with sharp edges and wide fork legs. The bike comes stock with 25mm Vittoria Corsa tires but easily accommodates 28’s with no issues.

What surprised me the most about this bike from the start was how compliant it is yet it is clearly a full bread race machine. Ride quality of this bike falls somewhere between the stiffer Cannondale Evo or the Giant TCR Advanced Pro and the Cannondale Synapse that I reviewed in November. The winner if we were going strictly off ride comfort would be the Synapse, but this BMC is not far behind. Front end compliance is just about on par with the Synapse but the SAVE seatpost wins out over the square taper of the Teammachine.  Beyond that one bit, the bike glides across broken pavement like a dream and it is easy to spend hours on the bike.

There is nothing claimed to be aero on the frame, yet while coasting downhill the bike continues to pick up speed, it might not be cheating with wind with shaping but it sure doesn’t fight it. Sprinting is a whole next level feel on the bike. Every ounce of power propels the bike forward and it never feels sluggish or like the first few hammer strokes were wasted. Even seated with an increase in power the bike surges and I have found myself fighting for positions on our group ride much closer to the front than ever before. 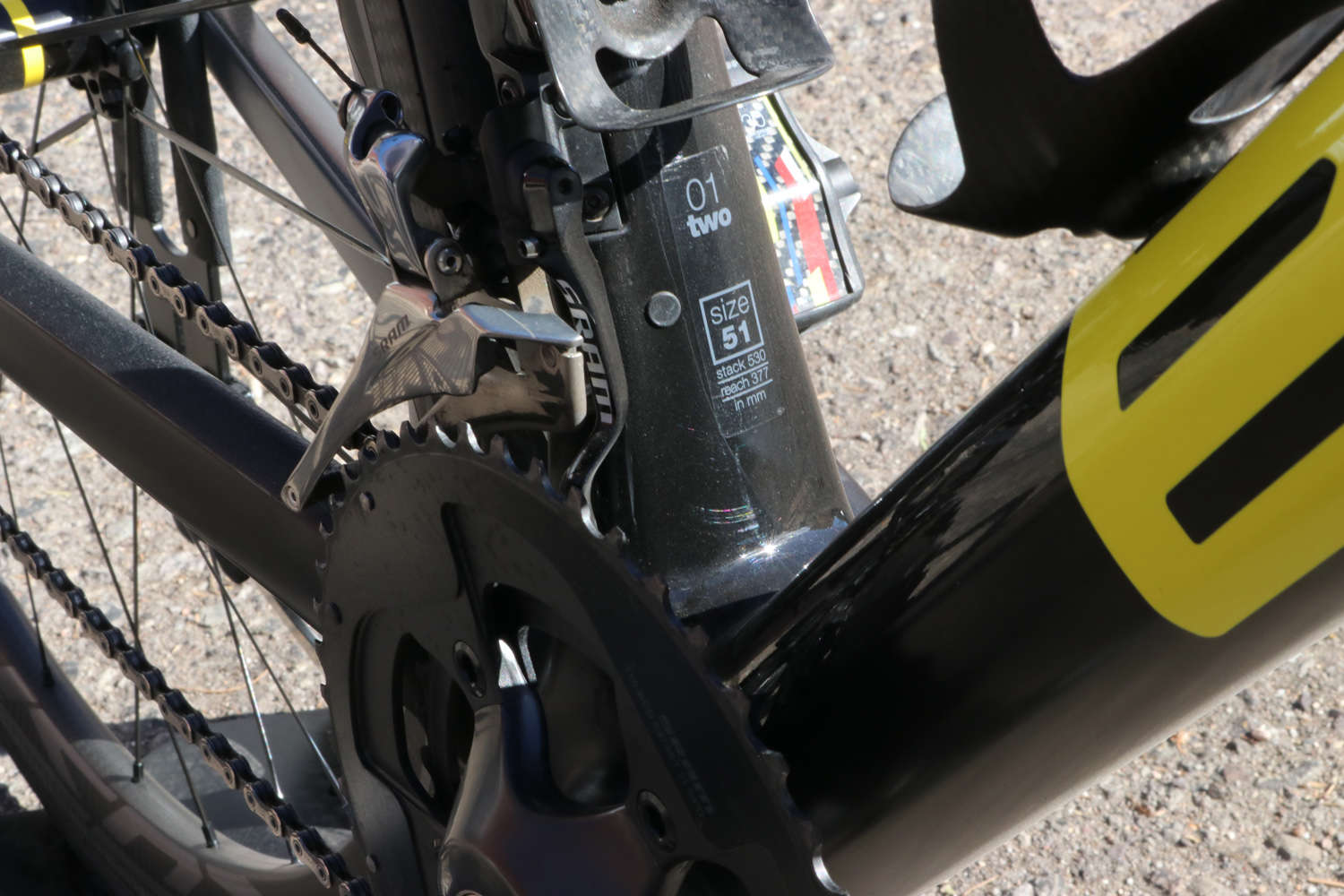 The spec on my bike is the SRAM Red mechanical with rim brakes. Yes, I would have preferred either Di2 or ETAP with disc brakes, but sensibility overcame desire since the price tag on the loaded bikes gets close to $12,000! The rest of the groupo is standard Red with the exception of the direct mount TRP brakes. SRAM has yet to put out any direct mounts and you just won’t see a mix of Shimano and SRAM so TRP it is. Even so the SLR01 version two comes in with a price tag of $5,499. At that price you would also expect a good set of wheels, but remember, this is a niche brand not the mass production line like Giant where you get a TON of bang for your buck, no this has a very reliable set of Mavic Ksyrium Elite wheels as stock. For the sake of testing, I have tried several sets of wheels on the bike and finally settled on the new Mavic Cosmic C40 UST wheels and tire set. Yes,  this would set you back another $2,300 taking the bike into the high stratosphere price range but combining a tubeless carbon wheel with this frame is the best way to go.

Other modifications I made to the bike are Easton EC 90 handlebars for that flat top area I love. Although I will say the BMC stock handlebars have a nice flat area, just not as wide as I prefer. I kept the stock stem on it as it has a wide-open faceplate and comes with both an out-front Garmin mount or combination Garmin/go pro style mount that sits in the face of the plate flush with the bars. I also put on the Fabric Scoop Flat saddle I have run for a while. The color matched Fizik Alante that comes stock is a nice touch and a good saddle, but we all know that is very subjective. 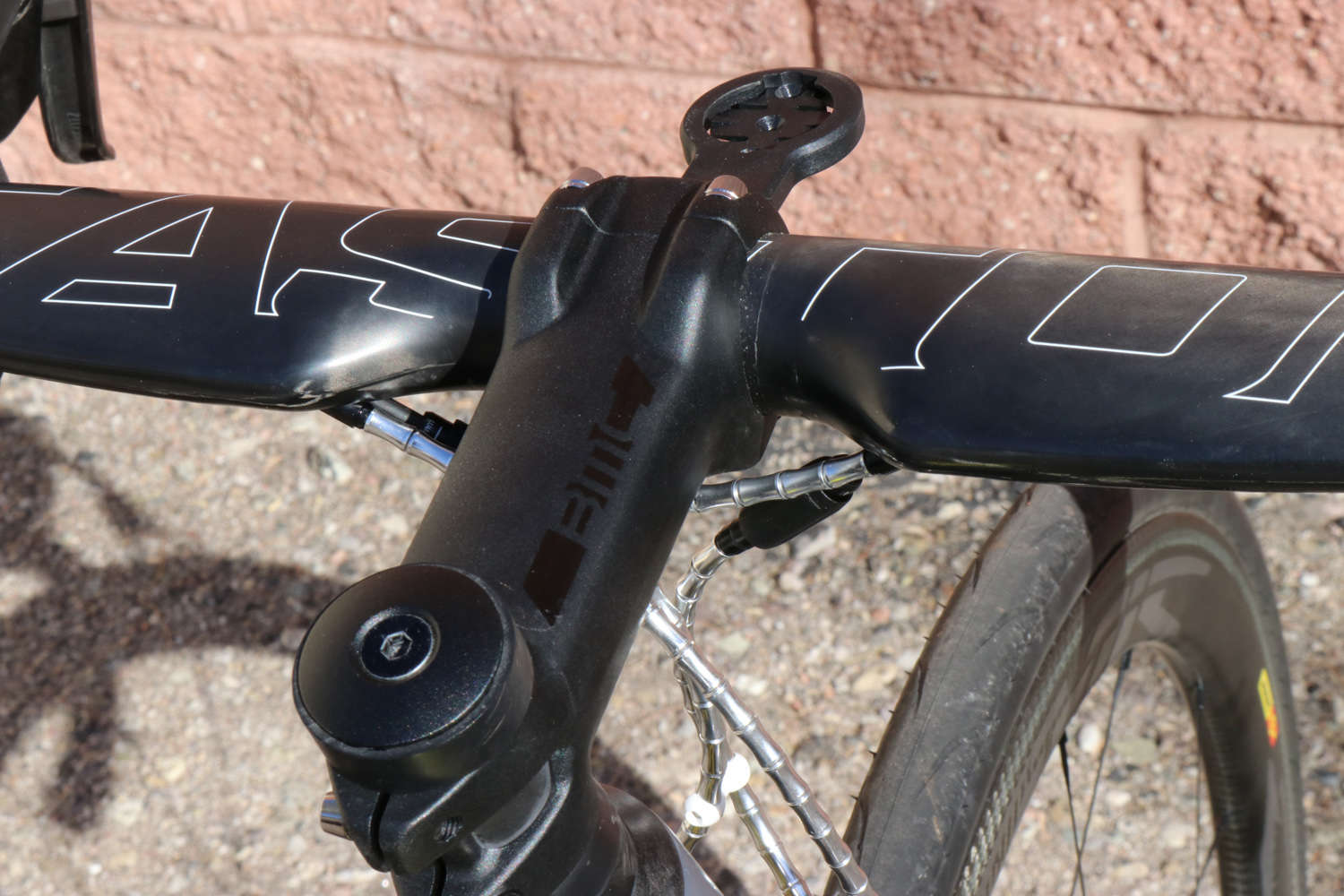 Throw on my Look Keo Carbon blade pedals, a couple of carbon bottle cages and the bike comes in just over 15lbs. Not bad at all, even if it is a size 51. Most recently I put on a set of Jagwire Elite Link cable sets for both shifting and braking. One, I did it for looks, but two to improve the braking of the TRP direct mount brakes which tend to have a little flex because of the cable routing. Surprisingly this housing change dropped the bike to exactly the legal UCI limit of 6.8 Kilos or 14.15 lbs.

So the question becomes, is the price worth it? It’s hard to compare apples to apples since most bikes that are coming with SRAM are ETAP and not Red, which I find a shame, but you will definitely pay more for the refined engineering and quality of the BMC. Is it worth it for this Swiss made bike? I would argue that it is right up there with the mystique of the Italian frames people are so enamored by. 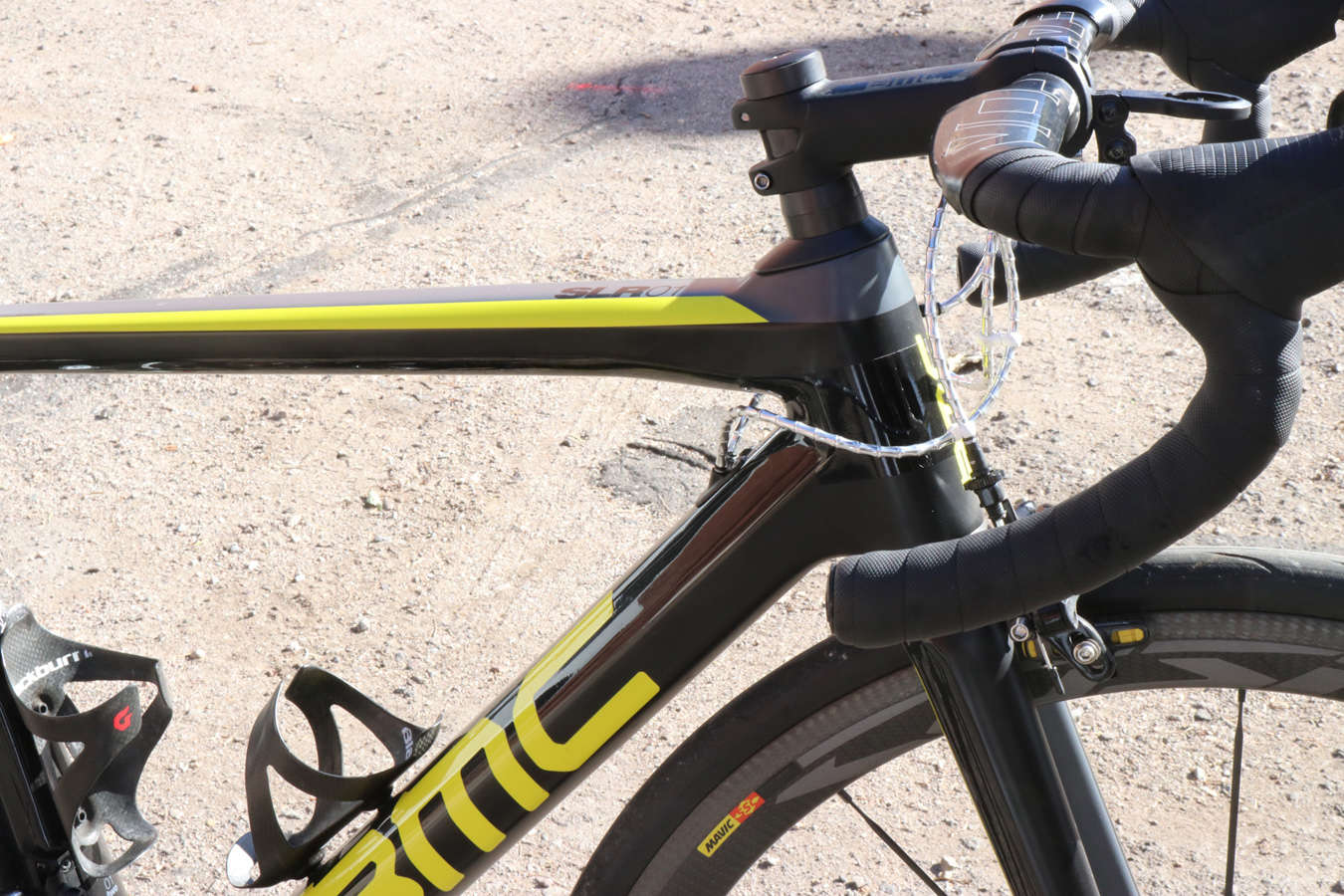 The take away on all this is that the bike is a winner. It’s stiff, yet compliant, dare I say, it’s sexy and sleek. Graphics are simple, yet just enough. To give you a perspective I usually get bikes and test them for 4-6 months then sell them as a well-cared for and loved demo, this one I bought.